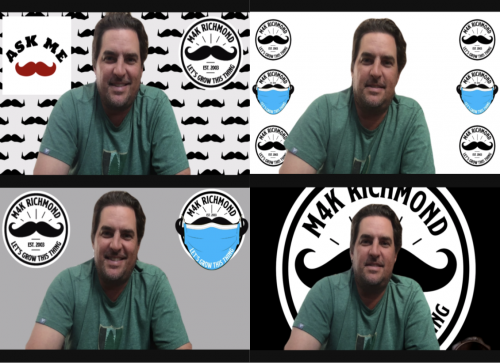 Lest you think this is some front for a bunch of guys who just don’t want to shave, our Ethics Committee has come up with Mustache Growing Rules:

What? You’re confused? “Mustaches? For kids?
Yes. Mustaches for Kids. We admit that it’s a somewhat unusual concept, so we’ve collected some answers to the questions we get:

Is this a joke?
No. Since its inception in 1999, thousands of Growers across the US and Canada have joined Mustaches for Kids, and have raised millions of dollars for children’s charities.  The Richmond chapter, M4K Richmond, started back in 2003 and since raised over $2,000,000 for local Richmond childrens charities.

I’m a woman. Can I join?
M4K Richmond does not discriminate against anyone on the basis of sex, age, nationality, or anything else you can think of. Anyone can raise money for the cause. Just remember, “The Mustache is more in the heart than on the face.”

I want to do it, but I’m scared.
Technically, that is not a question, but we will respond nonetheless. We suggest you step up to the plate. It’s time to overcome your fears and grow a Mustache for a good cause. Remember, there’s no “i” in “mustache”.

What will I tell my friends/co-workers/loved ones who object to my Mustache and ridicule me for it?
Do what we do. Fix them with a steely gaze and tell them the truth: “It’s for the kids.” Then ask them to make a donation.

Why Mustaches? Why the silly name?
This is not your typical fundraising organization. We believe in doing good and having a good time doing it.

Are you sure this isn’t a joke?
Positive.

Swear?
We swear to all that we hold holy that this is not a joke; we need your support.